Have you ever wondered what would happen if you added the legs of a frog and elephant to the body of a crocodile?

Turns out it wouldn't be a very successful animal, but I wouldn't have known that unless I had played with Tinybop's app Creature Garden, opens a new window. 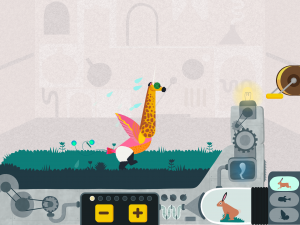 Let your child's imagination run rampant with this zoological free-for-all. The app lets the player choose between different animal body types: legs, fins, wings, eyes and more. When the creation is complete, give it a name and test it out. Is your combination sheep and fish (sheepish?) more equipped to run on land or swim in the ocean?

When you're done, put your creature to the test against others in a race. Make it more competitive by placing obstacles in the way. Which creature will win?

Creature Garden is available on Apple, opens a new window devices for $2.99.

*Remember, as with all media, it's best if you and your child play together. The American Pediatrics Association recommends that children ages 2 to 5 have a trusted adult to relate what they're seeing to the world around them. They also suggest that screen time be limited to one hour a day for this age group. For more information, take a look at their recommendations for media usage, opens a new window.

Apple Apps for Toddlers and Preschoolers

Android Apps for Toddlers and Preschoolers