Happy Birthday Betty White (January 17, 1922)! Did you know she has the longest television career of any female entertainer? 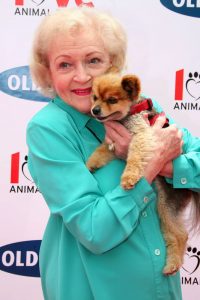 White may be best known for playing Rose Nylund in The Golden Girls, which aired from 1985 to 1992 and won several awards including the Primetime Emmy Award for Outstanding Comedy Series twice and three Golden Globes for Best Television Series - Musical or Comedy. She herself won multiple awards for her role including an Emmy.

Before the Golden Girls, she played Sue Ann Nivens on The Mary Tyler Moore Show for which she won multiple awards including two Emmy Awards.

Her 2011 autobiography If You Ask Me won her a Grammy Award for Best Spoken Word Album.

I have no regrets at all. None. I consider myself to be the luckiest old broad on two feet.

Betty White has received many awards and honors over the years, not only for work in television but also for her work with animal organizations. She has a star on the Hollywood Walk of Fame, she was inducted into the Television Hall of Fame, she won a Humane Award from the American Veterinary Medical Association for her charitable work with animals, the USDA Forest Service made her an honorary forest ranger and the list goes on and on.

Her tips for living happily for almost a century? "Enjoy life. Accentuate the positive, not the negative. It sounds so trite, but a lot of people will pick out something to complain about, rather than say, ‘Hey, that was great!’ It’s not hard to find great stuff if you look.” (Parade, opens a new window 2018)

If only she could live forever.