Gingerbread house making is a creative and tasty Christmas tradition for many families around the world. Often found in Christmas markets and charming holiday displays, they are typically made before Christmas using pieces of baked gingerbread dough assembled with royal icing (edible “glue” that will harden once dry) and decorated with icing and candy.

A History of Gingerbread Making 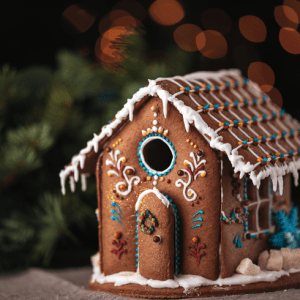 It is believed that ginger root was first cultivated in ancient China and was thought to be a natural preservative, as well as having magical and medicinal properties including easing indigestion. Because of this, it was baked into small cookies in Western Europe.

The tradition of decorated gingerbread houses began in Germany in the early 1800s, supposedly made popular after the Brothers Grimm, opens a new window 1812 fairytale of Hansel and Gretel, opens a new window, the story of two children lost in a forest who discover an edible house made of bread and sugar. In later versions it became gingerbread and sugared candies. The story inspired German bakers to begin crafting small, decorated houses from lebkuchen, spiced honey biscuits.

Gingerbread making became popular around Christmas because it was common to eat elaborately decorated ginger snap cookies at this time as well. Initially gingerbread was made in some form of houses or buildings, and it later became popular to make in the shape of figures that resembled important guests, which is credited to the court of Queen Elizabeth I. Gingerbread was also used across Europe as window decorations and became a charming architectural feature. Walled medieval towns in Germany such as Dinkelsbühl or Rothenberg ob der Tauber are often thought of as real-life towns of gingerbread houses with their picturesque, gabled buildings in pastel colors with cobblestone streets. 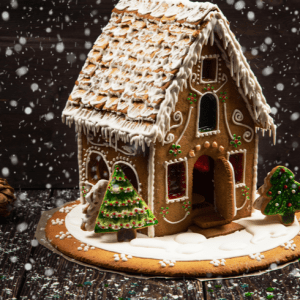 Why Build a Gingerbread House?

Gingerbread houses provide both an artistic outlet to express creativity in a fun and visually vibrant medium, as well as a delicious edible treat. With a vast array of materials available, gingerbread houses can be a low cost and fun practice for both children and adults…and how satisfying that they can be eaten afterward!

As you embark on creating a gingerbread house of your own, consider these fun tidbits:

The largest gingerbread house on record was built in Bryan, Texas (of course—everything is bigger in Texas!) by the Traditions Club on November 30, 2013. The previous record holder was constructed in Minnesota’s Mall of America in 2012. Here are the stats:

In the city of Bergen in Norway, they make an entire town of gingerbread houses annually. Called Pepperkakebyen, it features everything from tiny homes to local landmarks, trains, cars, boats and more. Take a peek at the sweet, edible town., opens a new window

Each year, families create unique gingerbread houses, but a number of hotels, malls, theme parks and more join the fun creating impressive displays to challenge the principles of cookie engineering. Check out these amazing creations from around the world., opens a new window

Whether you are planning a special Christmas activity or just looking for a tasty way to express your creativity, a gingerbread house is the perfect start to a new memory or tradition. Check out these suggested lists and create your own gingerbread fun!

Check out Gingerbread Stories Children Will Love, opens a new window in our collection.

Create Your Own Gingerbread House

Explore the art of making and decorating all things gingerbread with these fun titles.