Ernest Hemingway was born on July 21, 1899 in Oak Park, Illinois. He is considered one of the greatest American novelist of the 20th century and won both the Pulitzer Prize for The Old Man and the Sea in 1953 and the 1954 Nobel Prize in Literature. 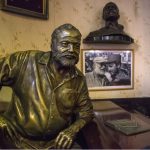 For every story and tale he created, there are an equal number of myths and legends surrounding the man himself. The World War I, opens a new window ambulance driver. Big game hunting in Africa. Bullfighting in Spain. The six-toed cats, opens a new window.

Discover more about the man and his work by exploring these resources.

“Every day is a new day. It is better to be lucky. But I would rather be exact. Then when luck comes you are ready.”― Ernest Hemingway, The Old Man and the Sea

One of Hemingway's most famous and enduring works, and a quick read at just 93 pages!

The Old Man and the Sea

Think you've read everything by Hemingway? Try this collection of lesser-known short stories.

The Short Stories of Ernest Hemingway

This novel about an American ambulance driver in Italy is based in part on Hemingway's experience during WWI.

A Farewell to Arms

Looking for more on Hemingway's complicated love life? Try this.

Learn tricks of the trade from the master.

Find more in our catalog of all things Hemingway: