Did you know winter is one of the best times to stargaze? That's right! Ready to bundle up and find out why?

Here are some celestial happenings you'll find in the night sky. 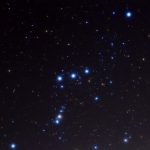 Look for Orion's iconic belt in the southwest sky. If you look off to the constellation's left shoulder, you'll notice a red star. That's Betelgeuse—visible in this photo—a supergiant star that's slowly nearing the end of its life (in the next 100,000 years, that is). If you have a telescope, focus on the cluster of stars below Orion's belt; that's the Orion Nebula. And then from Orion's belt, look to the left and down (about eight of Orion's "belt lengths") to find Sirius. 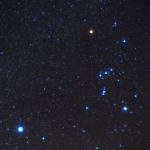 Sirius, the brightest star in the night sky

That's right, Sirius, or the dog star (hey Harry Potter fans, see what J.K. Rowling did there?), is the brightest star visible from Earth. It's part of the constellation Canis Major. The best time to see Sirius is in the southern skies from winter until mid-spring, particularly in February. Sirius is sometimes reported as a UFO because its colors change and flicker; all stars flicker because of how light passes through the Earth's atmosphere, but the effect is particularly noticeable because of Sirius's brightness. Sirius is the bright star in the lower left corner of this photo. 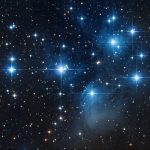 You'll find the Pleiades if you follow the stars in Orion's belt upward in a straight line. You'll see a bright star called Aldebaran, the eye of the bull Taurus, and then just a bit beyond that, you'll see the Pleiades, a small star cluster, shaped sort of like a dipper. The Greeks referred to these stars as the Seven Sisters. In Japanese, this cluster is called "Subaru" (next time you see a Subaru on the road, look at its logo). Also nearby is the Crab Nebula, the remnant of a star that exploded in 1054, and noted by Chinese, Korean, Arab and Japanese astronomers who recorded that the star's brightness was even visible during the day.

Do you know how to tell a planet apart from a star? A star will twinkle, a planet will not. Look for Mars soon after sunset in the east-northeast sky. Jupiter and Saturn rise later in the evening, in the southwest sky. With a pair of powerful binoculars or a telescope, you might be able to see Saturn's rings. Venus, the brightest planet, is visible during the predawn hours in the east-southeast.

If you want more skywatching tips or sights to see, check out astronomy and stargazing books and movies for all things relating to the night sky.