The March on Washington for Jobs and Freedom was held in Washington, D.C. on August 28, 1963. This event drew an estimated 250,000 people who gathered in front of the Lincoln Memorial to advocate for civil and economic rights for African Americans. The march occurred 100 years after Lincoln's Emancipation Proclamation, which went into effect January 1, 1863.

You can listen to many of the historic speeches given at the march with The Great March on Washington, opens a new window recordings available on hoopla.

Nobody Turn Me Around provides firsthand accounts of the preparations for the march, the opposition to it, and what it felt like to be a part of it.

Martin Luther King Jr. and the 1963 March on Washington explores the events leading up to King's iconic "I Have a Dream" speech as well as the events of the day. 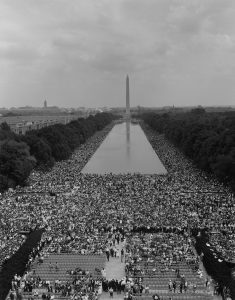 A. Phillip Randolph and Bayard Rustin

The march was organized by Randolph and Rustin, two social activists who were champions of equal rights for African Americans.

A. Phillip Randolph, opens a new window was the first of what has been dubbed the "The Big Ten" speakers who addressed the crowd that day. Randolph had previously planned a march on Washington in 1941 to protest racial discrimination and segregation in the U.S. military and war industries.

Bayard Rustin was instrumental in making the march a reality, but found himself often marginalized in the movement due to his status as a gay man.

Trouble Maker for Justice showcases Rustin as a champion of peaceful protest who dedicated his life to civil rights.

Reuther, a White man, was a labor leader and ally of Martin Luther King, Jr. who helped organize and finance the march, as well as being the second official speaker of the day.

Brothers on the Line is a streaming video that chronicles Reuther's journey to build up the United Auto Workers union and his work in the civil rights movement.

Lewis was the youngest speaker at the march at only 23 years old. He would go on to become a U.S. statesman, serving in the House of Representatives from 1987 until his death in 2020. Lewis chronicled his experiences in the civil rights movement in the outstanding 3-part graphic novel series March.

Walking With the Wind is Lewis' memoir of his life leading up to and during the movement.

Dr. King was the last speaker of the day and delivered his famous "I Have a Dream" speech, which became one of the most iconic speeches of all time.

Martin Luther King Jr. and the March on Washington

I Have A Dream

None of the official speeches given at the march were delivered by women, but the program did feature a "Tribute to Negro Women Fighters for Freedom."

Some famous and influential women who participated in the program included:

Anderson was originally slated to sing the National Anthem, but arrived late and sang later in the program instead.

The Voice That Challenged A Nation

Baker was the first Black woman to star in a major motion picture in 1927. She gave a preliminary speech early in the program and spoke again before Dr. King's finishing speech.

Gospel singer Jackson performed two songs during the march, but contributed in another way she's rarely credited for. The famous line "I have a dream" wasn't part of Dr. King's original speech, but was a departure from his notes when prompted by Jackson to, "Tell 'em about the dream, Martin, tell 'em about the dream!"

Even though the March on Washington was considered a success and signified significant progress in the civil rights movement, tragedy struck less than a month later. On September 15, 1963, the 16th Street Baptist Church in Birmingham, Alabama was bombed injuring twenty-two and killing four young girls.

While the World Watched