During college, I wanted to learn about my heritage, so I studied the Swedish language and Scandinavian literature. I took a class about the Sami, the indigenous people who live in Northern Norway, Sweden, Finland and Russia's Kola Peninsula. Here's just a few things I learned about the Sami.

Early works by historians are thought to reference the Sami by different names as early as the 200 CE. It's also possible they invented skis! They were a Nomadic people whose livelihood was dictated by the seasons and the bounty of the land.

If they were living near the coast, they fished. If they were inland, they often hunted or kept herds of reindeer. Their homes were temporarily dwellings called Lavvu (or Goahte), opens a new window, which looked remarkably similar to a teepee.

The Sami lived in the northern parts of Scandinavian (Sweden, Norway, Finland and Denmark), and the Norse people lived in the the southern areas. When the two cultures began to interact, the Norse people labeled the Sami as "primitive" people, and they passed laws that stripped the Sami of their language, religion and way of life. Many Sami children were sent to state-run boarding schools.

As a Nomadic people, the Sami language is diverse. They have ten distinct languages, six of which have their own written versions. All of these languages are related to but not especially similar to Finnish, Estonian and Hungarian.

The Sami language was illegal in Norway from 1773 until 1958, so for many years, the number of speakers dwindled. Now, the UNESCO classifies many of the Sami languages as definitely endangered and a few are already extinct (Source: Sami Languages on Wikipedia, opens a new window).

The Sami have a rich, vibrant culture. Their traditional music is the joik, which is a form of chant or poem that is typically sung without musical instruments. Many people first heard a joik during the 1994 Winter Olympics in Lillehammer, Norway.

Nils-Aslak Valkeapää wrote and sang the joik while wearing traditional Sami dress. To see and experience this stunning moment, go to 8:40 in this Olympics website video, opens a new window.

Modern Sami musicians and writers continue to share their unique perspective with the world. Here are just a few:

After a long period of oppression, the Sami received formal recognition in Finland (as of 1973), Norway (1987), Sweden (1993) and Russian (1993). In several of those countries, the Sami have their own parliament of elected officials and legal protection for their way of life. 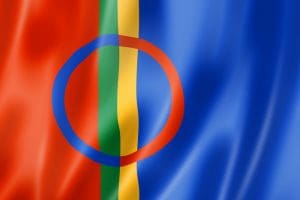 Sami and Native American activists have been part of the many people who worked to ensure that indigenous people are granted human rights; one milestone of those efforts was when the United Nations adopted the Declaration on the Rights of Indigenous Peoples, opens a new window in 2007.

If you'd like to learn more about the ongoing work to support indigenous rights, I'd suggest these resources:

Indigenous Rights around the World

Our History Is the Future