Hanukkah is an eight-day long Jewish celebration. It is also known as The Festival of Lights. The festival celebrates when the people of Israel reclaimed The Holy Temple in Jerusalem. When they wanted to light the menorah, they could only find one supply of oil, enough to only last one day. But the miracle is that the oil lasted eight nights when new oil could be made and purified.

Note: Chanukah and Hanukkah are the same celebration. Hanukkah is a variation on the spelling of Chanukah.

Hanukkah Books for 0 to 5

Your littlest children can celebrate Hanukkah with these top holiday picture books.

The lighting of the menorah is the nightly highlight of the celebration. The menorah is placed in a window but it can also be placed in a doorway. Special blessings are said and traditional songs are sung. And fried foods are consumed. 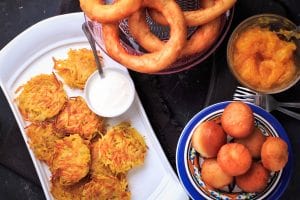 Because oil plays such a large part of the origins of Hanukkah, it's traditional to eat foods fried in oil. Typical foods include latke, which resembles a potato pancake, and sufganya which are close to jelly donuts.

Dreidel is a popular, fun game of chance that is played during this time of year. Players will push their luck by spinning the dreidel for tokens (i.e. coins, candy, nuts, etc.). Each player starts out with a number of tokens. This starting number can be decided by the players. To begin, each player will put a token into the communal pot. Then they will take turns spinning the dreidel.

The dreidel will land on one of four sides, with different Hebrew letters on each side. The letters are:

The game ends when one person has won all of the tokens. 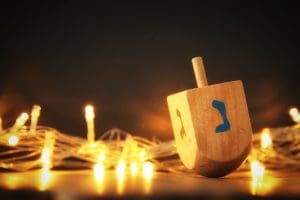 Gelt, or gifts of money, are also typical during Hanukkah. Though it is to be noted that the emphasis on gift giving has been amplified over the years due to the correlation with Christmas and other holidays during this time of year.

Swoon over these holiday romances centered around Hanukkah. 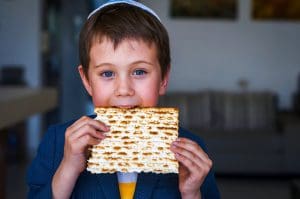 Check out these books that celebrate Jewish heritage, tell stories of bravery and triumph, and give us a glimpse into history. Looking for more personal recommendations? Let us help! https://arapahoelibraries.org/need-suggestions/