Emily Dickinson was an American poet born December 10, 1830, in Amherst, Massachusetts. An intensely private person, only a few of Dickinson's poems were ever published during her lifetime, and those were altered to fit the conventions of poetry of the time. It wasn't until after Dickinson's death in 1886 that her sister Lavinia discovered hundreds of poems Emily had written over the years at their shared homestead that is now a museum, opens a new window. 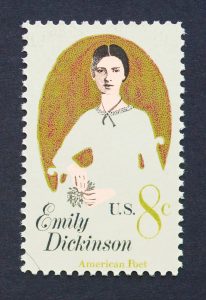 The first collection of her poems was published in 1890, with a complete collection of her poetry not becoming available until 1955. Dickinson is known for the unconventional punctuation and capitalization in her poems, which are terse, poignant and deal with themes of nature, death and immortality.

This volume collects the nearly 1800 poems of Dickinson in their original form.

The Poems of Emily Dickinson

Dickinson had a deep connection to the natural world that greatly influenced her writing.

Second only to her poems, Dickinson's letters have their own literary merit.